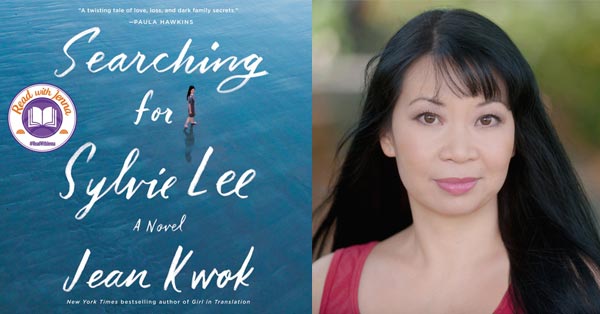 Award-winning author Jean Kwok shared some fantastic writing and publishing tips in the masterclass she gave for us in October 2021. We discussed her experiences with writing and publishing as well as craft decisions in her latest New York Times and international best-seller Searching for Sylvie Lee. Topics covered included working with multiple narrators, the importance of structure, how to trick yourself into writing, why reading is essential to writing, and how Jean landed her agent. In this post we’ve collected some of our favourite takeaways from the class.

Jean was born in Hong Kong and immigrated to the US when she was five. She earned a bachelor’s degree from Harvard and an MFA from Columbia University. Searching for Sylvie Lee, which was a Today Show Book Club pick, is her third novel. Her first two novels Girl in Translation and Mambo in Chinatown were also best-sellers. Jean has appeared on The Today Show, Good Morning America, NPR and a television documentary was filmed about her and her work. We are very grateful she was willing to take a break from writing her fourth novel to do a masterclass with us.

Jean recommended taking advice on writing process with a grain of salt. “You have to find what works for you,” she said. Jean related how early in her writing career she embraced E.L. Doctorow’s famous dictum: “Writing is like driving at night in the fog. You can only see as far as your headlights, but you can make the whole trip that way.” Jean says as a result she spent 10 years trying to write her first novel “in a fog”.

“Some writers know where they’re headed without any planning or structure; they’re like pigeons who will always find their way home. Me, I’m a mole! I need a plan, like a three-act structure.” Jean says she needs to know where her novel is going quite early in the process. She likes to map out the character’s internal and external goals, their motivation, and the obstacles standing in their way. For example, in Searching for Sylvie Lee, Amy’s external goal is to find her sister Sylvie because she loves her. Her internal goal is to find herself and her own strengths, now that she must emerge from the shadow of her older sister. “I hadn’t taken a novel course like the one you offer at IWC,” she said, “so it took me a long time to figure it out for myself.”

On having multiple narrators:

Jean was asked why Searching for Sylvie Lee is narrated by three different characters: Sylvie before she disappears; her sister Amy, who is searching for Sylvie after her disappearance; and their mother back in New York. “Multiple narrators allow me to show how the characters misunderstand each other,” explained Jean. For example, Amy is jealous of Sylvie as the beautiful, brilliant sister while Sylvie thinks their mother cares only about Amy. It also let her give each character their own voice based on the language they feel most comfortable with. For example, in Amy’s chapters of the novel, we hear her mother speak only broken English but in the chapters from the mother’s point of view we get a sense of her rich, poetic voice transliterated from Chinese.

When asked whether or not she ever gets writer’s block, Jean said, “Being blocked is my natural state.” But she keeps pushing forward even if she’s not feeling inspired. She suggested there are several reasons you might get stuck—”it can be because you don’t have enough craft yet or your book isn’t well enough designed.” It can be difficult to write without a clear vision of what’s next and many beginning writers think they have to know everything before they can progress. To get around that, Jean does something she calls pre-writing—where she just gets something, anything, down. “In my pre-writing, I might rant about how boring this scene is or how I have no idea how to create tension,” she said, “but it lets me ease into the writing process, making it less challenging and more approachable.” Even if 95% has to be tossed, there’s at least 5% that gives her what she needs to write the scene on the next pass. With the third draft, she really pulls it together and looks for ways to add more tension.

Jean said she used to hate crafting settings until she realized how useful setting can be to express character. With a first-person or close-third person narrator, what the character sees and how it’s described can reveal a lot about them and their emotional state. For example, Sylvie and Amy have very different impressions of the Netherlands from the air. To Sylvie, it’s a warm blanket, a sign of coming home. To Amy, it’s completely alien.

On writing from life:

Jean said she’s an autobiographical writer and that her fiction often comes from real life inspiration. Searching for Sylvie Lee was inspired by the disappearance of her own beloved brother Kwan in 2009. “But,” she says, “I couldn’t write about his disappearance directly.” It wasn’t until she came upon the idea of framing the story around two sisters instead of a sister and a brother that she was able to move forward.

On the importance of reading:

Jean reads widely and voraciously, normally a book a day. “Reading feeds your writing. I don’t know how you can be a good writer and not read.” She’s always looking for interesting ideas she might bend to her own use.

On getting to the page:

Jean confessed, “I am a terrible procrastinator! I will actively look for things to distract from my writing: cleaning the bathroom, Facebook, whatever.” She’s found a few things that help her stick to her writing goals.

“If you’re really hoping to make a career in writing, start getting active on social media now.” Jean advises to at least reserve your name as a handle on the major platforms and as a domain name for your website. “You can always return to these platforms later when the time is right.”

On finding an agent & not giving up in the face of rejection:

Jean had a few short stories published when she was doing her MFA at Columbia and got a well-regarded agent off the back of those. The agent supported and encouraged the whole ten years while she worked on her first novel. She said, “When I finally finished the manuscript, I sent it to him, and he told it was unpublishable and dropped me from the agency. It was soul-destroying.” But she picked herself up, made a list of top agents in New York, and started sending her manuscript out. She landed her dream agent and her “unpublishable” novel became a best seller.

Jean related how one woman she knows motivated herself to finish her novel by approaching an agent before it was finished. “Don’t do that! Motivate yourself some other way.” She pointed out that you usually only get one chance to impress an agent, and if you don’t have your novel to the level where you know it is the best it can be, they’ll reject it. And even if they ask to hear from you again when it’s finished, they’ll always be tainted by that first, refused version. She suggests finding a writing group or workshop to help keep you motivated and hone your manuscript.