In love with languages

An interview with Megin Jiménez 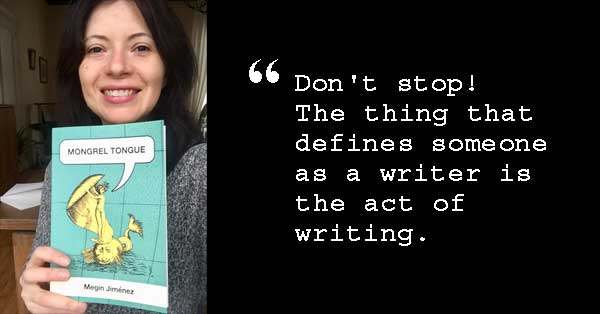 Megin Jiménez became fascinated with languages at a young age. She was born in Venezuela but grew up in the US speaking both English and Spanish. At university she studied French and English Literature and spent a year in Paris studying at the Sorbonne. Not content to just study literature, she wanted to learn how to write herself and completed the MFA programme in creative writing at The New School in New York with a concentration in poetry. She had to find a way to support herself while working on her writing, and her facility with languages landed her a career in translation—starting with the United Nations and then moving to the International Criminal Court in The Hague.

After three years she left the ICC to make more time for her writing and now works as a freelance translator and editor, in addition to teaching with the International Writers’ Collective. Megin lives with her husband and a stray cat they adopted in Greece (“someday we will have a dog”) in Leiden, which she describes as, “living in a place that looks like a storybook, with layers of history on every block. I love the minimal car traffic in the center and cycling everywhere, living surrounded by water in the canals…it’s a small city, but quite international”.

Her collection of prose poems Mongrel Tongue was just published by 1913 Press. You can get your copy direct from the publisher, Small Press Distribution or Amazon. You can view upcoming courses with Megin here.

Where did you find your inspiration for the collection?

I was in love with the prose poem for a while and decide to write into this form. I like thinking about the rhythm of a sentence, how manageable a square little paragraph seems, and the leaps you can then make from sentence to sentence, the surprises you can pack in, and the way a prose poem subverts narrative expectations. I liked the idea of a collection of tight prose poems, though I started to take apart the form and loosen it up by the end of the book. I wrote into themes I noticed, or that had been unconscious obsessions, like living in a female body, living between cultures, and our collective compulsion towards hero-making and storytelling, and how this is abused or distorted by history books, advertising and politics.

Why did you call it “Mongrel Tongue”?

The title was the last thing I changed (the collection in its various other iterations has had two other titles). If you Google “mongrel tongue” it’s a phrase most often used to describe the English language, which is such an amalgam of influences and has had a long history of both invasion by and appropriation of other languages. The phrase also touches on what I’ve been writing through and around for some time—how women, Latin Americans, mixed-up people of the 21st century must adapt the forms of expression we’ve inherited, which weren’t exactly intended for us or created with us in mind, to express our experiences in our own way. I also wanted to ask the question upfront of why “mongrel” is a disparaging word, and why such value is placed on whatever its opposite is.

I had been sending out the manuscript in various forms for a number of years, so it was a profound feeling of relief to have it be selected by a poet I admired, Daniel Borzutzky, for a press I was excited about. It felt like my work had found its home; the starting point of 1913 Press is the modernist experiment. The books it publishes question accepted forms, seek innovation in genre, expression, political or social engagement, and often have a fundamental playfulness. This all suits my book, as it’s situated somewhere between poetry and prose (which is also maybe what made it more difficult to place at publishers of traditional lyric poetry). The team there was also open to my ideas of what the book would look like, which I appreciated. The press is attentive to the book as art object and is careful about design, color, the quality of paper used, etc., which is not always the case with small presses.

There’s an atmosphere generated in the classroom you don’t feel anywhere else. At its best, it’s a feeling of mutual respect, genuine enthusiasm for what’s being discussed and sometimes even a kind of giddy elation, I think because it recalls childhood, the sense of openness and that there’s so much to be learned. It’s engagement with others through a positive vessel—ideas and where they can take you.

In terms of teaching writing in particular, I love seeing how different every student’s work is, even when given the same assignment, and I like seeing how students progress. We spend so much time on passive consumption—on the internet, with Netflix—I like to think that no matter what becomes of a piece of writing in the world, that students leave the class with the satisfaction of self-expression, of having spent time discovering something they didn’t know about themselves or didn’t know they were capable of.

Can you say something about your work as a translator? How has it served you as a writer?

Translation has been incredibly beneficial to me as a writer. Translation makes you consider every word and really think about how a sentence is put together. It makes you solve language puzzles that aren’t of your own creation.

When did you start writing?

When I was eight years old and a teacher told us we would be writing our own stories. I couldn’t stop thinking about my story and to my surprise found myself pulling out pencil and paper and writing at the dining room table without it having been assigned as homework. It was no one else’s idea but mine, which felt like an exciting secret, and no one but me could tell that story. The only thing I had wanted the Christmas before was a diary that had a little lock and key, so I obviously was already wanting my own space to set down my thoughts and emotions.

What books inspired you in your youth, and who are you passionate about these days?

I wouldn’t say most hated, but I definitely have a list of most overrated, but it’s a dangerous question as I wouldn’t want anyone to feel judged for their tastes. I do respect every reader’s right to like what they like. However, I don’t have a problem saying that even in high school, I couldn’t bear Ayn Rand.

Organizing the rest of my life: catching up on personal emails, booking appointments I’ve been putting off, etc. It makes me feel like I’ve at least accomplished something!

I have to schedule it or it’s easy to put it off forever. I tend to write between 9 and 11pm and on weekend afternoons.

At my desk, or on the sofa, sometimes at a bar or cafe with only pen and notebook when I need to leave the laptop behind.

It’s not a conscious routine, but I often start by reading over work that I’ve recently completed or nearly completed. It reminds me that I am, indeed, capable of writing. I also often start by typing up notes I’ve taken in various notebooks into a big document, without structure or narrative. It’s helpful to have whatever phrases, images or characters that have caught my interest in a single place I can return to, as I keep too many notebooks. I read over the big list of notes and often one will jump out at me and I go from there. Both of those are good methods to trick me into beginning to write.

What is the last book you read?

What’s the best writing advice you ever received?

Don’t stop! The thing that defines someone as a writer is the act of writing.

2 responses on "In love with languages"