From boardroom to classroom

An interview with Karen Kao 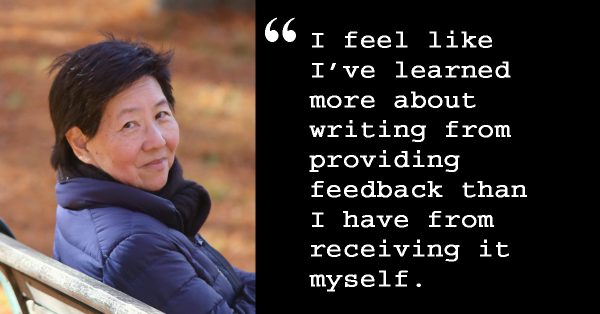 Karen Kao began teaching at the Collective in 2018. Her debut novel, The Dancing Girl and the Turtle, had just been published the year before, and she was eager to become part of an active writing community.

In a prior life, Karen was a corporate lawyer. In 2011, she did something many of us dream of – she quit her day job to write full time. And she’s used that time well. She is the winner of the 2022 Kenyon Review Short Nonfiction Prize, judged by Maggie Nelson, and a nominee for the Pushcart Prize, Best of the Net and the VERA.

As Karen prepares to take on the role of acting director of the International Writers’ Collective during Sarah’s sabbatical, we caught up with her for this interview.

What is your writer’s origin story?

I started out as a poet while still in college. Law school utterly derailed my love of language. As a lawyer, I did not have the time or the emotional bandwidth to write. I quit my practice to devote myself to writing fiction based on stories I heard as a child of Old Shanghai. The Dancing Girl and the Turtle is part of a planned quartet of interlocking novels set in that world. About two years ago, I fell in love with the lyric essay as a way to write about personal experiences that do not lend themselves to fiction. Give me a couple more years and I may turn out to be a poet after all.

Where are you from originally and how did you end up in Amsterdam?

I was born and grew up in Los Angeles. I met my husband, who’s Dutch, at a law school party in Washington, D.C. The deal was that we would live in Amsterdam for two years before returning to the U.S. Thirty years and two sons later, Amsterdam is home.

What was it like to transition from lawyer to writer?

This is deeply embarrassing to admit but what I missed the most was feeling important. My identity and a large part of my sense of self-worth were dependent on my profession. It took some time to recalibrate. The joy of writing – the act of creation, being present to myself, hearing a character speak to me, and eventually the thrill of seeing my work in print – carried me through those first years. And then, joining the Collective and becoming a teacher gave me an additional sense of purpose and satisfaction. I have no regrets!

Talk to us about the lyric essay. Why does it appeal to you?

The lyric essay, which is the creative nonfiction form I like the most, draws heavily from poetic devices and techniques and also allows me to use many of the skills I learned from writing fiction. There’s terrific work being written by poets like Claudia Rankine and Ross Gay, wonderful memoirists like Jo Ann Beard, and, of course, the inimitable Maggie Nelson. I’m so excited about this form that I want to share it with everyone, which is why I’m teaching two special courses on it this summer.

How long did it take you to get published?

My first short story was published in 2015 and my novel in 2017. There were many, many, many rejection letters in between. In fact, they’re still pouring in. But like they say, if you don’t swing, you’ll definitely miss. This year I feel like I’m on a roll, starting with the Kenyon Review win. I couldn’t believe it when I opened that email saying Maggie Nelson had selected my essay.

How does your teaching affect your writing?

I’m learning all the time: from the sample texts, the great questions students pose and the wonderful exercises they write in response. I feel like I’ve learned more about writing from providing feedback than I have from receiving it myself. The act of analyzing a text to understand how it works teaches me so much about how to construct my own pieces.

Where are you with your novel quartet?

Funny you should ask. My second novel is out with beta readers. I’ve just completed outlining the third volume of my quartet and am currently knee-deep in research. Last month, I was working in an archive and ran into a postcard that the Beat poet Allen Ginsburg sent from Amsterdam. “Cheese, canals, windmills, bridges, dog shit” some things never change!

One thing is about to change. How does it feel to become acting director of the Collective?

Well, first, there’s the fear of not living up to Sarah’s example. She works so hard behind the scenes to make the Collective hum. I don’t want to break it! At the same time, I’m excited to be so deeply involved. It will be fun to meet students from the other workshops. And the teachers are all so great. The Collective has such a positive vibe that I know we’ll make it together.

0 responses on "From boardroom to classroom"