For the love of a good story 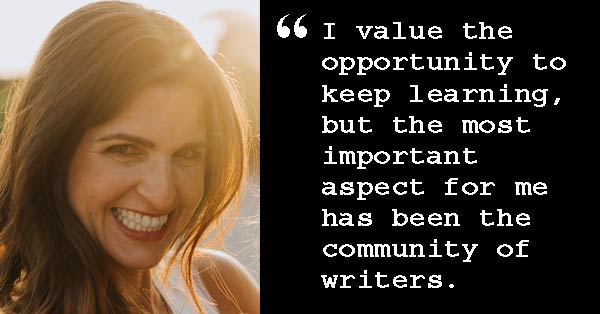 Jennifer van der Kwast started taking classes with the Collective in 2017—looking to connect with a writing community and reengage with her creative self. She’d published a novel by the age of 30, but when she began working as a copywriter, she lost a lot of the joy she used to take in writing. She enjoyed the classes so much (and was so incredibly insightful in her feedback) that she trained to become a teacher and joined the faculty. And now her second novel is almost ready for beta readers—she has lots of volunteers from among her fellow teachers in the Collective.

Like most of our teachers, she has an international background. She grew up on the island of Curaçao, went to university at Dartmouth in the US, worked in New York, and eventually made her way to Amsterdam, where she currently lives with her partner and their two daughters. We recently spoke on Zoom about the long, strange path that led her to the Collective and the thing that has guided her through it all—her love of a good story. The interview below has been edited for concision and clarity. You can watch some video excerpts from the original interview on our Facebook page.

Q: What is your writer origin story?

A: It’s a little different than most people expect from a writing teacher. I did not start off thinking I was going to be a writer. I wrote all the time as a kid—short stories and beginnings of novels. But then I got it into my mind that I wanted to be a filmmaker so I studied film. For my first job out of college, I worked for a film company and was eventually promoted to the job of story editor, which meant that I read three to four unpublished novels a week to assess whether or not they would make good films. And after about a year or two of doing that, I realized that the novels were so much better than the films that they would eventually become. And this was true across the board for everything I read. And so I decided to make a career switch—instead of focusing on films that I would start focusing on writing. I spent a lot of time dissecting what really worked in manuscripts, what really worked in storytelling. I started working at a literary agency, where I got to work hands-on with writers figuring out what could make their novels more successful.

Q: You worked for quite a famous literary agency in New York. What can you tell us about that experience?

A: It’s called Harold Ober Associates. And it was primarily famous for representing F. Scott Fitzgerald and J.D. Salinger. And in fact, there was a film out recently called My Salinger Year (based on a book of course) which takes place at exactly the same office where I worked. Salinger was notorious for refusing interviews and refusing to talk to anyone about his work. So, when students ask me, why can’t I respond to feedback? I always tell them that one of my early jobs working at the literary agency was saying, “No, you can’t speak to Salinger. Salinger can’t answer that question. I’m sorry, the material is just going to have to speak for itself.” I think maybe that’s one of the most important lessons I learned is that you can’t explain what you meant to say when you wrote the book. It really has to be a standalone work. And what I also learned, having made the transition from film to the literary world, is that the rules of storytelling are the largely same. In fact, some of “the rules” that come from filmmaking are important to keep in mind when you start working on novels. One of the books on writing that I like to recommend is Story by Robert McKee. It’s specifically geared towards screenwriters, but it is incredibly valuable to anyone who’s setting out to tell any kind of story—short story, novel—the same rules apply.

Q: How did you write and publish your first novel?

A: I wrote my first novel when I still lived in New York. I had actually been let go from a company when it went bankrupt. And I had all this time on my hands. And of course, I spent all that time panicking about when I was going to find my next job. And then I found my next job, and I hated it. So I decided that I was going to spend all my free time writing a book, so I could sell the book, and I could quit the job that I hated. Which is really funny, because when I was unemployed and did have the time to write, I didn’t use it wisely. And then when I got the job and didn’t have any time to write, I forced myself to find the time. So I would come home after working all day and spend the rest of the evening writing. What worked in my favor, I realized later, is that it would take me about 45 minutes to an hour to walk from the office to home. And I was able to use that time to think about what I was going to write. So by the time I opened up my laptop, I knew exactly what I was going to say. And that’s something I’ve tried to remember as an approach—to give myself time away from my screen to just think about what I want to write. When you stare at a blank document, it can be pretty intimidating. And so much of writing is, in fact, staring off into space. I wrote the novel quite quickly. I think it took me about a year. And then I approached agents with it with a cover letter and was mostly rejected until I found one that was really excited to represent me. Things happened pretty quickly from there. Having an agent helped shield me when the rejections came from publishers, because of course rejections came. And then there was the one phone call, the one phone call that matters, the one that says okay, there’s someone who believes in you, there’s someone who sees the value in your work. I think that’s something else I learned in the process, that the novel you write isn’t going to make everyone happy and not everyone’s going to love it, but as long as it finds one champion, you’re in a good place.

Q: What do you like about teaching creative writing?

A: That’s an easy answer. I love everything about teaching creative writing! This might sound like a familiar scenario to some people, but for a long time, I was a copywriter and I would work in marketing departments using my writing skills to sell products, and it was a little soul-crushing and it took all the joy out of writing for me. So when the opportunity came up to teach creative writing, I really jumped at it. It was an opportunity to talk about something I really feel passionate about, great storytelling, and it’s an opportunity to see people pick up on the techniques and really start to mold them to their own ends. And as many classes as I teach, I never get bored. It’s always fun for me to reread the sample pieces and exercises we use, and to hear people find something else interesting and effective in them. I also am continually inspired by the people that take the classes. There’s always someone that does something I haven’t seen before. I have that moment where I think, “This is great. This is something I’m going to have to remember as a technique.” So it’s an opportunity to continue learning and to continue talking about the stuff that I really love. And of course, it so gratifying to see people emerge as writers and really find their voice.

Q: What are your top 3 tips for aspiring writers?

A: The most important tip is that you have to give yourself permission to write poorly, you have to be willing to fail. The good stuff comes from experiments, from trying something you haven’t done before, even trying something that no one’s ever done before. It might not work out, but that’s okay. I think when you take the pressure off yourself, that’s when the real magic happens. So, go ahead and write poorly and write quickly to the end. Once you have material to work with, something on the page, you can start to shape it and fine-tune it and make it awesome. I’m a big fan of the editing process. There’s a piece of advice that I know I should take, and I don’t, which is to write first thing in the morning, set your alarm clock for an hour or half an hour earlier than you normally would. And right then apparently, as soon as you wake up, you’re at your most creative. That sounds wonderful. I write in the middle of the day or at night. And I don’t feel my most creative or my most productive, but it’s the only time that I have available because my two kids wake up way too early for me to spend any time writing in the morning. Sometimes I have to be strict with myself, because at the end of the day it’s just so easy to just pour a glass of wine and turn on Netflix. I have to remind myself that, as challenging as it is, I do love to write. Most of the time. My last tip is to find a support network. You can’t write in a vacuum, I mean you can, but you aren’t able to look at your own writing with a fresh, unbiased perspective. So it’s incredibly helpful to find at least one other person that you trust and that you know will be honest, who can give you the feedback you need to see if what you have is really working.

Q: What has it been like teaching with the Collective?

A: I started teaching about five months after I had my second child. It was a strange period because I was at the stage where I was nervous about leaving my baby behind but also really anxious to get out of the house and recover the “old me”. I remember it was difficult to leave, but once I found myself at the bookstore, surrounded by new students and new books and Elements of Craft print-outs, it was such a relief to feel like me again. I get so much pleasure from reading and writing and talking about reading and writing, and five-month-old babies are terrible for that kind of discussion. I value the opportunity to keep learning, but I do think the most important aspect for me, has been the community of writers. This is something that I really struggled with when I moved from New York to Amsterdam. In New York, I was always surrounded by writers and storytellers of one kind or another. And I felt like once I lost touch with other creative people that I could brainstorm with, could use a sounding board for my ideas, it became harder to be creative myself. The support and motivation and inspiration I get from my fellow teachers, the friends I’ve made through the Collective, and my students are what keeps me going.

2 responses on "For the love of a good story"