An interview with Erik Raschke 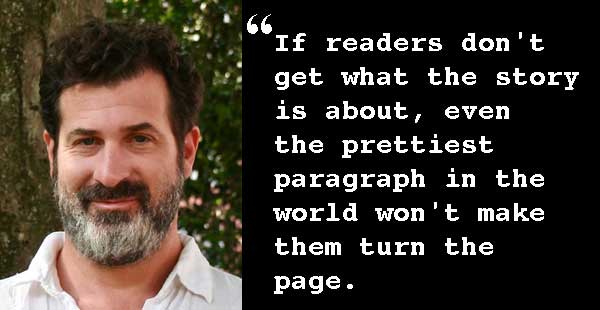 There’s no doubt that our online instructor Erik Raschke has a sense of humour—when asked why he moved to the Netherlands, he says he “came for the weather”. He was born and raised in Denver, Colorado, at the foot of the Rocky Mountains so the pancake flatness of the Dutch landscape took some getting used to—at least it’s good for biking.

He’s a writer and teacher, and father of three boys, and has lived in Amsterdam for the past 12 years. His first novel, The Book of Samuel, was published by St. Martin’s Press in 2009 and his short stories and essays have appeared in the New York Times, Atlantic Monthly, Hobart, Hazlitt, Guernica and others.

When did you start writing?

When I was nine I wrote stories about my Spaniel-like blonde mutt, Indiana Jones.

What books inspired you in your youth, and who are you passionate about these days?

I read every horror book imaginable until one day my English teacher gave me A Confederacy of Dunces. My mom also told me I wasn’t allowed to read The World According to Garp, so of course, I read that next. After that, I read anything with a hint of rebellion. Nowadays, I’m very eclectic in my fiction. I almost always read what my friends and colleagues write. I’m usually working through a short story collection in-between novels. I’ll read anything Lawrence Osborne puts out, and the last few Booker winners have been great, especially Anna Burns and Paul Beatty.

What’s the best writing advice you ever received?

My grandma used to growl, cigarette dangling from her mouth, ashes dripping on her bathrobe, “You write pretty, but I don’t get your point.” I learned from her that one can always construct beautiful sentences, but if readers don’t get what the story is about, then even the prettiest paragraph in the world won’t make them turn the page.

I only have to put on a clean shirt and nobody knows that I’m actually wearing He-Man pajama pants. Actually, the most rewarding thing about teaching for the Collective is how motivated the students are. I’m always amazed by how much they can improve over the course of a term, and, of course, their enthusiasm makes teaching so much more delightful.

You have a new book coming out in 2020. What was your inspiration?

My new novel, To the Mountain, is based on Isaac and Abraham’s story of faith and sacrifice. It’s about a father who loses his autistic son in a forest during a blizzard. The inspiration came from my own life, with my own son. I never would have been able to write this novel the way I did, if I hadn’t spent the last thirteen years raising him and having autism be such an enormous part of my life.

Miserable, torturous, insufferable, debilitating, then, slowly, gently, enlightening, inspiring, exciting, and now thrilling. The book went from 80,000 to 100,000 and then down to 45,000 words… where it stayed. Pretty short for a novel. My editor worked with Michael Punke on The Revenant (which was a book I studied assiduously before writing To the Mountain). He taught me how to really cut the exposition and slim the narrative so that the story is constantly moving forward. You’d be surprised how much your audience can figure out the backstory on their own.

Does writing a second novel feel much different than the first?

With a first novel, you’re just trying to figure out which way is up. Eleven years ago, when I wrote my first novel, The Book of Samuel, my editor, who had also edited Hemingway, had a pretty non-existant editorial-style (which is probably why Hemingway liked him). I really needed someone to hold my hand back then and help me with some big choices. As a result, The Book of Samuel wasn’t really a Young Adult novel, it wasn’t really cross-over, and it wasn’t entirely a literary novel. While The Book of Samuel was well-received critically, since it didn’t fall into an easy category, bookstores and marketing departments didn’t quite know what to do with it. With To the Mountain I knew immediately why I was writing the book, what I wanted to say, how I wanted to say it, and who I hope will read it. Also, I wasn’t fumbling with mechanical questions, like what is better first or third person, past or present tense, etc. As I was editing, I grappled mostly with questions about what part of my writing was relevant to the story.

Never. I have to make it.

I write in the morning. First thing after coffee. Before the clatter of the day interferes.

My workspace, which is about a ten-minute walk from my house… just far enough not to hear the kids scream.

A novel about a tech millionaire who hires his best friend to be his butler.

What’s a strange fact about you that your students and colleagues would be surprised to hear?

I collect country-western records. [Note: we are not surprised.]

Do you read e-books?

I prefer paper books but read on every device. My Kindle is great because I can enlarge the font to suit my middle-age eyesight.

What is the last book you read? What’s next?

Last nonfiction book I read is Darwin Amongst the Machines. I have a stack of Dutch nonfiction I’m going work through. I love western American authors. My next novel is a trilogy by William Eastlake called Lyric of the Circle Heart.

1 responses on "Finding the story"