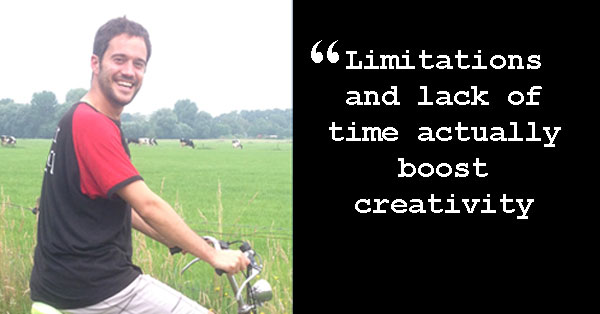 Angel Orozco modestly says he considers himself just “someone who likes stories and learning about writing,” not a writer. But the fact is he’s pretty darn good at it. When he was 15, he won a writing contest and the prize was two months of travel in Mexico. Since then writing and traveling have been two of his greatest pleasures. He studied journalism and film in his native Spain, and then hit the road—he’s lived in England and Austria, and then four years ago moved to the Netherlands, where he lives in Wageningen with his boyfriend (who also loves traveling) and a white cat named Flaco who is “friendlier than a dog.” He’s a member of our Level II workshop.

Q: How has your journalistic background and your day job as a writer affected your fiction writing and vice versa?
A: Working as a journalist, I learnt to be observant and to include specific details. I didn’t know these things were also important when trying to write fiction until I took my first workshop. At the moment I am working as a freelance copywriter and video maker, and thanks to the workshops, I feel I have a bigger toolbox when writing ads, for example. I’ve learned to be way more conscious of craft and of the possible routes a story can take, and writing new exercises and sharing them week by week has helped me to become a tiny bit more confident.

Q; What’s it like writing in English as a second language?
A: It took me a year to finally resolve to join the workshop because I was very scared of writing in English. The first term was challenging but I also took it as an opportunity to improve my overall English skills and broaden my vocabulary. After the first workshop, I made an attempt to write in Spanish again and I couldn’t write more than one page: it was very strange because I didn’t feel like I fully knew either language. For now I am enjoying writing in English because I feel the limitations work in favor of creativity.

Q: Where do you get your inspiration from?
A: I have themes that interest me because of my personal life or the personal life of people around me, and then I go and ask myself: what would happen if, for example, I were a more confident version of myself, or a more doubtful version of myself, or a more arrogant, or rich, or pragmatic, or deluded, or more obsessed with cleanliness and order, or more crazy, or less crazy… I like imagining possible outcomes asking these kinds of questions, thinking of myself or someone I know or a character that caught my attention from a book or a movie.

Q: What have you learned about yourself through the workshops? What’s surprised you?
A: I have come to understand better “my voice”, and to comprehend my weaknesses from a constructive point of view (no need to beat myself up all the time). There are two things that have surprised me: firstly that I actually like poetry, and secondly that, because the workshops make you write something new every week applying different techniques and guidelines, the limitations and lack of time actually boost creativity. I’ve often found myself writing scenes that are far from the characters, tone, and themes I usually write about, and this is, I believe, very enriching because it encourages you to explore more freely, sample your voice, and discover new things.