An evening with Michael Chabon 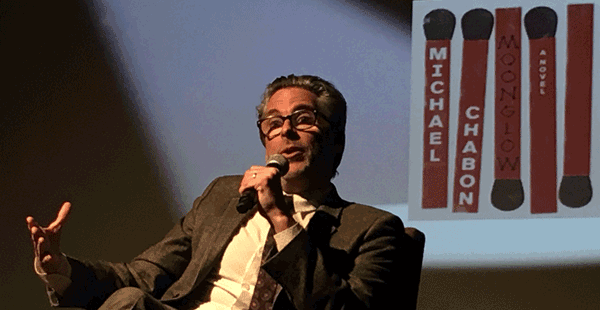 Michael Chabon, Pulitzer Prize winning author of The Amazing Adventures of Kavalier & Clay, recently spoke in Amsterdam at the Tolhuistuin courtesy of the John Adams Institute. He was launching the Dutch translation of his newest book Moonglow, a ‘fictional memoir’ or, as moderator Hollis Kurman described it, ‘authentically fake’.

Chabon said that when he sat down to write he thought he was going to write a complete different novel and that this one came out of nowhere. Book ideas, he said, call to him like the Sirens in The Odyssey. They say, ‘I’ll be really short. You could probably write me in two weeks’, but they always lie.

The idea for Moonglow came from a family legend about Chabon’s uncle, that he had lost his job at an office supply company to make room for the notorious perjurer and suspected Russian spy Alger Hiss, who had just been released from prison. Chabon ended up changing his uncle to his grandfather, the office supply company to one that makes barrettes from loops of piano wire, and many other details besides. In the author’s note at the beginning of the book, he assures the reader that wherever liberties have been taken with the facts, they have been taken with ‘due abandon’.

We’ve studied Chabon in some of my classes and I’ve always been jealous of the way he can describe a character’s emotions so precisely and with such economy. I asked him about it afterwards and he said sometimes it just comes to him, but most of the time it takes many, many drafts.

Here are a few of my favourite takeaways from the evening:

On revision: Be ruthless but save everything you cut. (Chabon has a file of ‘outtakes’ and does occasionally repurpose a description.)

On description: Find a balance between over describing and under describing and make every detail count. For example, in Moonglow a character is described as wearing not just ‘sandals’ or even ‘Birkenstocks’ but ‘imitation Birkenstocks of Israeli manufacture with white tube socks’. ‘Description has to reveal something about the character, otherwise it’s a wasted opportunity.’

On thinking something’s finished vs. really being done: Find a couple of trusted readers that you can turn your work over to when you think it’s finished, people that will point out the darlings you need to kill, the characters you’ve neglected, and the jokes that just aren’t funny. (Chabon admitted sometimes he laughs at his own lines even before he’s written them.)

On writing about people you know and whose reaction you possibly care about: ‘If it’s someone you want to revenge yourself on, then you go right ahead. And if it’s parents, fuck ‘em. That’s what they get for raising a writer…Really, you can’t worry about that stuff or you’ll be second guessing yourself all the time. And the person you’re worried about probably won’t even notice or will get upset about things you never expected.’

On writers as activists in the age of Trump: ‘I don’t think writers have a special responsibility. I think everyone has a responsibility to use whatever tools they have handy to resist.’

0 responses on "An evening with Michael Chabon"